The most trusted, professional, and profitable mining pool.

Encounter a problem related to the pool or have a request for a feature? Post your issue here and we will help you out.
Post Reply
5 posts • Page 1 of 1

I just visited a website, and I put in a few figures, say "5GHs" for LTC and "5GHs" for DOGE. The estimated profit returned was higher for DOGE alone than for LTC alone; I know that many pools do merge mining LTC+DOGE and payout in just LTC. I was wondering if Prohashing has investigated mining DOGE alone to see if profits increase for the Scrypt algo. From what I can tell, proswitching goes between LTC and Dash, I think. Perhaps if DOGE alone was added to Proswitching, we'd see more money on Scrypt? Perhaps? Maybe?

I know that Doge is merge-mined as it stands on Prohashing right now.

I am not sure if it's even possible to mine it alone as a solo coin, apart from merge mining. Is the nature of Doge such that mining it as an individual coin is impossible, regardless of programming effort? Is this even worth exploring?

When I click on https://prohashing.com/live-pool-status -> Coin Status -> Algorithm = Scrypt ... I see a nice table of all the Scrypt coins, that I assume Proswitching goes through when figuring out what is the most profitable coin on the algo. Doge is on this list too, but as a merge mined coin. When I click on Doge, I see that it has a block reward of 10,000. Wouldn't that be something in PPLNS

Anyhow. I'm just spit-balling ideas. Maybe I don't know the logistics and underlying programming of it all, but if there's a way to make more money, then I'm all for it.
Top

It's possible to mine DOGE alone; it just doesn't make any sense to do that. You'd be losing half the money you could otherwise make.

DOGE is already merge-mined optimally no matter what other coin is being mined, so no action needs to be taken. There's no advantage to mining only one coin during merge mining.
Top

Steve Sokolowski wrote: ↑Thu Jul 29, 2021 12:59 pm It's possible to mine DOGE alone; it just doesn't make any sense to do that. You'd be losing half the money you could otherwise make.

Steve, I believe you.

But from my naïve point of view, this is what I see. I see a chart on Prohashing's website that lists all the Scrypt coins. Profitability in USD in cents per MegaHash is listed on this chart. I know that coin profitability varies, and hence proswitching determines which one among the many is more profitable automatically. A natural question then arises: if Doge shows the highest profit, why isn't Proswitching mining Doge alone with 100% hashrate but instead giving Doge a partial hash rate from merge mining? Or am I misunderstanding merge mining? Does 100% of the Hashrate trickle to Doge or does mining Doge receive some portion of the total hashrate?

Now, I'm overlapping this information with information from the worker configurator. (https://prohashing.com/tools/miner-configurator/Scrypt).. when I play with Mining Method=Static Coin, the following coins appear in the drop down menu: Aevocoin, Beyondcoin, Cheesecoin, DigiBye, Emerald, Florincoin, Gcoin, Ioclcoin, Litecoin, Mooncoin, Parallelcoin, Pyrk, RubleBit, Shieldcoin, Strayacoin, Verge, iBitHub ... Doge is not in the worker configuration list, even though many less profitable coins are. To me, that seems odd. Why list all those other coins but leave out Doge? (This is why I asked if it was even possible to mine doge as a solo coin. "Perhaps the reason it was left out was because it's mining Doge as a solo coin isn't possible in the first place," I guessed.)

Now if I take information from the chart, which at the time of the screenshot, Dogecoin = 0.93926534 cents/MH/s, I begin to wonder why mining Doge as a static coin isn't an option in the worker configuration section. Since Doge shows the highest cents per MH out of all the coins, why isn't going after Doge alone listed?

And from this, I asked the question about mining Doge alone. How could anyone be losing 1/2 the money when Doge itself shows the highest profitability? I don't know the nuts-and-bolts behind the scenes, but this question just jumped out at me.

I realize I have no idea what goes on in the backend. I realize that there are other factors at work that justify what you said. No problem there--no beef or push back from me--to be clear.

I'm just trying to understand why going after Doge alone isn't profitable when the chart says that it's the most profitable Scrypt coin. 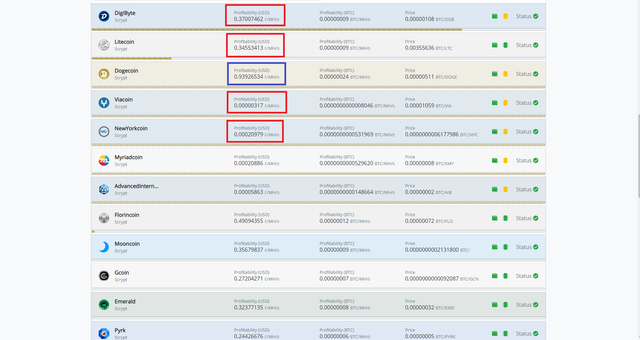 from my understanding, the 0.93 cents per megahash/s is on a per 24 hour period??? like i mine at 1mh/s i'll get .93 cents (just under 1 cent) per day.
from binance academy "Merged mining refers to the act of mining two or more cryptocurrencies at the same time, without sacrificing overall mining performance. Essentially, a miner can use their computational power to mine blocks on multiple chains concurrently through the use of what is known as Auxiliary Proof of Work (AuxPoW)."
Top
Post Reply
5 posts • Page 1 of 1

Return to “System support and feedback”